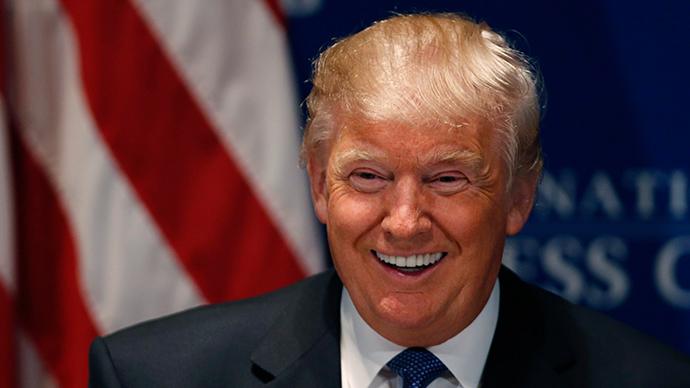 Donald Trump, pictured, laughing. This image was used on the internet for memes and other hilarious means. (http://ruski.biz/2014/09/29/trump-gets-trolled-retweets-serial-killers-pic-wants-to-sue-prankster/)

“I just wanted to see how far I could get” said Trump, “I mean, what man in his right mind would vote for me?” (Trump was highest in the polls for the Republican nomination). Trump then explained how he had hoped his endeavors would further his television personality: “Remember when I  shaved McMahon’s head on Wrestlemania? That was awesome, I wanna do more stuff like that.”

Reporters were quite taken aback by this news. Subsequently, speculations arose. What else could Trump be hiding? When asked this question by reporter Vlad Kychynski, Trump then removed his combover toupee, exposing the face of George III of the United Kingdom which appeared to be molded to Trump’s head in a Voldemort-from-the-first-Harry-Potter-like fashion. When questioned on the state of current affairs, George III replied: “taxes lol.”