The first step to a better dress code is to make some rules more specific and equal. 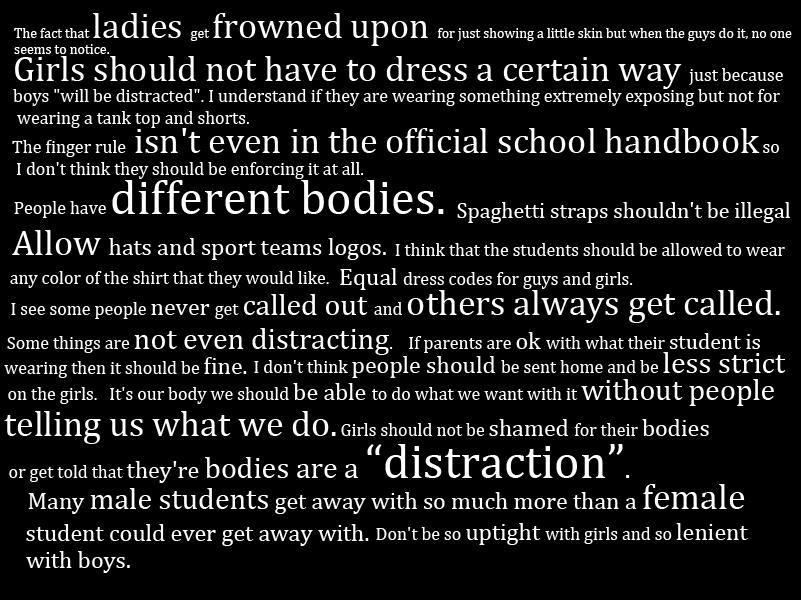 In the San Jose Unified School District there are strict dress code policies that all students must abide by. At Lincoln High School there are an additional set of specific rules for our students for their day to day attire. These rules have caused controversy around the Lincoln high school community. The students, teachers, and administrators share conflicting opinions on how the dress code should be addressed.

The main goal of the appearance/dress code given by the SJUSD board of education is for the school to “be concerned only when [style of clothing or hairdo] are extreme and could cause school distraction, disruption or be unsafe”(21). These rules were written in The Student Handbook for the 2015-2016 school year with regulations when violated, but why is this such a controversial topic at Lincoln High School?

We asked two people from each perspective of this controversy: two students, two administrators, and two teachers. The interviews were very helpful in the way that helped Lion Tales understand the problems and disagreement with the dress code for Lincoln. Senior Daniel Rios, shared his concerns on the dress code explaining how he has worn pieces of clothing that “go against the dress code, but [he has] friends who blatantly go against the dress code and are not acknowledged at all.” A story that Daniel shared was when he wore a dress with an open back to school and he was called into the office and was asked to change. He was very upset because he has had many friends wear items of clothing such as short shorts, tank tops, offensive logos and more that disregard the dress code purposely and openly, but aren’t asked to change.

The other student Lion Tales interviewed, Nyla Rizvi, shared a similar point of view in addition to their story of how they were treated while being dress coded. One day when it was a relatively hot day Mx. Rizvi chose to wear shorts to school that they knew were too short. The incident that Mx. Rizvi was appalled by was when the campus supervisor who was dress coding them publicly humiliated them by asking another faculty member to point out what was wrong with what they were wearing, which “is not apart of protocol” Mx. Rizvi added. After this scene that the campus supervisor created and they were walking back to the office for Mx. Rizvi to change it is believed that the campus supervisor made a derogatory comment towards them which felt like “sexual harassment and bullying.” This was a pressing issue for Mx. Rizvi because they were negatively addressed when being dress coded. This student knew that they weren’t following the code correctly, but under no circumstance should any student be openly questioned for their mistakes or choices. (Mx.: gender neutral title. Preferred pronoun: people prefer that you use gender neutral or gender inclusive pronouns when talking to or about them. Mx. Rizvi’s preferred pronoun=they, them, their.)

While this incident seems alarming, there are always two sides to a story. Lion Tales interviewed the campus supervisor involved, Lourdes Avila, to hear her side. Her main point she emphasized was that she would never intentionally harass a student with any type of derogatory comment. Ms. Avila explained she would only use the word “inappropriate” or “that’s not dress code” and that unfortunately what the student “misunderstood their mistake.” She also shared that this incident came to administration’s attention and the two were sat down to discuss the issue. In the end of the sit down, the problem between the two was resolved by administration. Ms. Avila has been a campus supervisor for eighteen years and knows all of her assigned duties and how to respectfully address all members of the Lincoln community.

The other administrator that Lion Tales interviewed was Angela Lyte Crowther the assistant principal of instruction and guidance. Ms. Lyte’s position on the issue was a simple solution or a very strict compromise. She believes “that the dress code is necessary, keeps students safe, and it gives school a more collegial appearance.” Ms. Lyte shares her ideas on changing the dress code drastically by switching to uniforms. She supports everything that uniforms offer by unifying a “school pride,[no one will] have the pressures of style, and it takes the [timed] stress out of coming to school.” Ms. Lyte makes many valid arguments for why Lincoln should transform its dress code strictly to a select uniform standard; and she is not the only one with this perspective.

One of the teachers that Lion Tales interviewed shared his opinion on the dress code very bluntly. Jim Cullison, a U.S. history teacher at Lincoln, said that he supports uniforms as a solid simple solution. A “white polo and khaki pants” and there is nothing more to it. Mr. Cullison didn’t have a lot to say because this is his solution the apparent problem concerning the amount of students who defy the dress code daily.

On the other hand, Ann-Marie Katemopoulos, the choir teacher at Lincoln, has almost the complete opposite opinion. Ms. Katemopoulos stated three main points on the dress code: it needs to be “more concrete,” if the instruction was for the student to “do something about it before asking [them] to go to the office” it would help some frustration about the matter, and lastly that “in [students] opinion it is not being enforced across the board.” Ms. Katemopoulos senses the issues between the students and administration and even had some helpful solutions to certain situations. She used the example the shorts length rule as a rule that is not concrete enough and said that instead of using finger tips we could set a solid number length (like “three or four inches past the crotch”) we could use a ruler to make sure that the shorts meet even standards for every body type. Also, if there is something being wore that is against dress code but the student has a sweater or some other piece of clothing with them that they could use to cover the problem, this would solve the issue of being taken out of class time and becoming a hassle/disturbance. Then finally, Ms. Katemopoulos shares that she has an understand of the student perspective that the dress code is not being implemented to all students, whether it’s in gender or body type.

After Lion Tales examined the results from our survey and acknowledged the different perspectives that are in conflict about the dress code we have come to a compromise to solve this controversy. Even though uniforms would ultimately eliminate the amount of defiance that the students uphold against following the dress code, we think that Lincoln has a very close knit open environment that imagination and creativity enhances which includes the contained freedom of attire. The rules that Lincoln have are not all in the wrong and we believe that they do ensure the right amount of safety and appropriateness on campus. The exception to our statement is that some of the rules are not explicit enough and are not created for proper, equal distribution of the code.

The first step to a better dress code is to make some rules more specific and equal. For example: the fingertip rule (that shorts may not be shorter than the student’s’ fingertips when standing straight up) needs to be more specific and the sports teams attire rule, where no sports teams attire is allowed to be worn on campus unless instruction is given that it is feasible for local teams only, should be removed from school policy. We feel that these rules may have seemed fair for a long time but it is upsetting to the students because they feel that they are no longer safety issues and that they are not a distraction on campus.

To help the issue of student defiance towards the dress code Lion Tales believes the second step should be a strict consequence when the dress code is violated, so that students understand that they should try to avoid breaking the dress code. For example, Lincoln has had a lunch time detention called Aim in the past which students were given after a first or second warning. Bringing back AIM as a first or second offense consequence could help show the student body they need to think more about what they come to school wearing. Then after a third or fourth offense students could be assigned Saturday school, and if the student continued to disobey the regulations of the dress code further measures should be taken. Overall, the dress code is created with good intentions, but is not always accurate for the student body and does not have the right repercussions for administrators/teachers to enforces the rules.