Last week, Lincoln’s Girls Volleyball season ended with a bang on senior night. Players dressed up, made baskets for seniors and prepared speeches. The main gym was decorated for the occasion with balloons and posters. Parents also brought their own posters, flowers and balloons for their seniors. 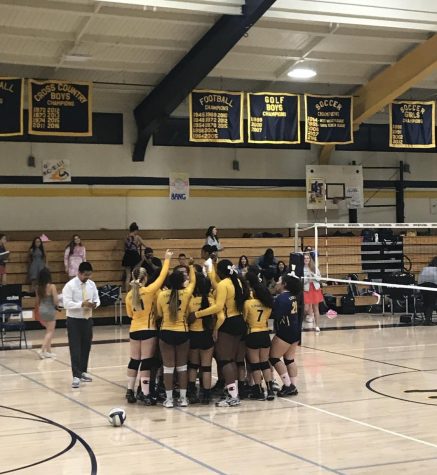 After JV’s win against Gunderson the varsity team warmed up and acknowledged Gunderson’s seniors. Then the senior night endeavors ensued. Seniors were welcomed with their family one by one by groups of other players who prepared baskets and heart-warming speeches. Tears were shed along with lots of hugs.

Varsity then played their last tight game of the season where they beat Gunderson in the 5th set. As players left for the locker room, family and friends flooded the court waiting to congratulate, take pictures and give more hugs upon their return.

This is when Lion Tales decided to talk to Coach Kim, varsity’s head coach, about this season’s seniors. When asked what single word he would use to describe them he responded “Character, good character.” We then went to Michelle Te, a senior, and asked her to describe the season. She responded with one word, “Motivation.” She also said that the volleyball program has made her “physically and mentally stronger as a person” in the last four years.