Colors of Equality: How LGBTQ+ Lincoln Students are Treated 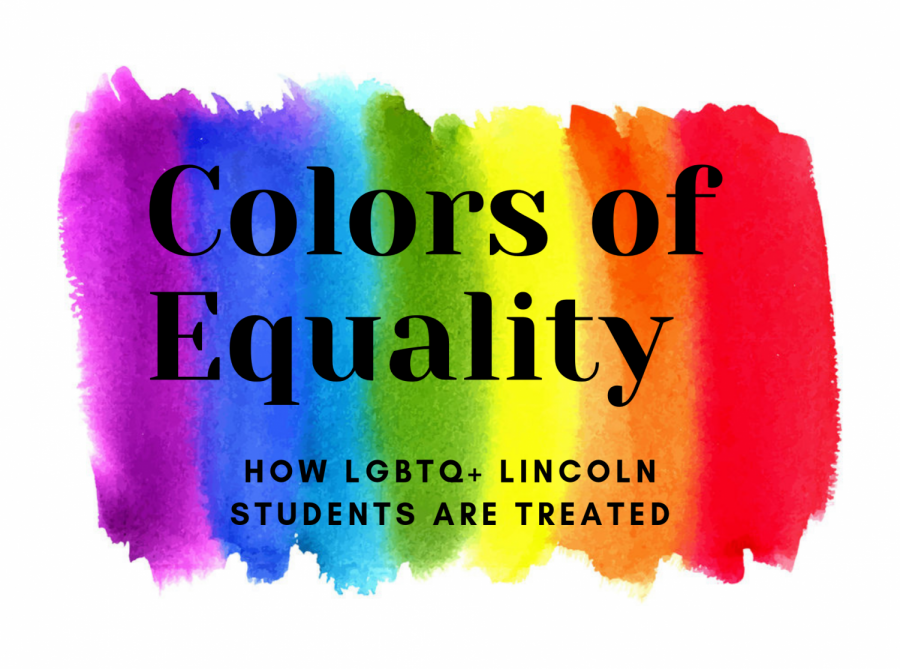 Ever since Lincoln High School installed the gender neutral bathrooms, discussion about the LGBTQ+ community has been a hot topic in the administration. Talk about how students should be treated and how to properly use pronouns were held at staff meetings as well. With all of this in mind, one would assume that everything is perfect. However, that is not always the case.

Lincoln Lion Tales conducted a survey asking students overall how LGBTQ+ students are treated and the responses were surprising. When 86 students (as of 3/15/19) were asked if LGBTQ+ students were treated equally at school, over 33% responded that they were not. It doesn’t seem like a lot, but if you factor in the rest of the students that did not take the survey, which is about 2000, approximately over 600 students agree with the statement that LGBTQ+ students are not treated equally by their peers at school, give or take. This is very alarming, especially when 77% of students say they have heard another student make a homophobic comment. 50 of the 86 students state that the primary slur that they have heard is the word “fag.” Surprisingly, nearly every student who answered the survey know what a homophobic comment is, so what’s going on?

Lion Tales asked a student if they have had any bad experiences relating to their sexuality and David Alvarez, a gay freshman claimed that students would make “gay jokes” that often made him uncomfortable and upset. He also thinks that a solution to that problem would be to “hold a rally about LGBTQ and just let everyone stand up and talk about what they want and how they feel and how they different they are treated versus straight students.”

Based on the survey, many students are unaware of the historical meaning of derogatory words and the weight that they carry. This is especially true when you consider that the use of these words are commonly used in their home and with their friends. An example of this would be the word “fag” or “faggot”. The word originated from the UK and actually meant a bundle of sticks, but over the years, people started calling homosexual people this to compare them to a bundle of sticks. The reason why is because bundles of sticks are used for fires and people often tried to, or did in some cases, set gay men and women on fire for many years with the intent of murder.

If students were more educated on this topic, these hurtful words would become non existent or at least be not socially accepted, and hate towards certain groups of people would minimize. “I feel like everybody knows about the LGBT community, but I think that everyone could learn a little bit more about it.”