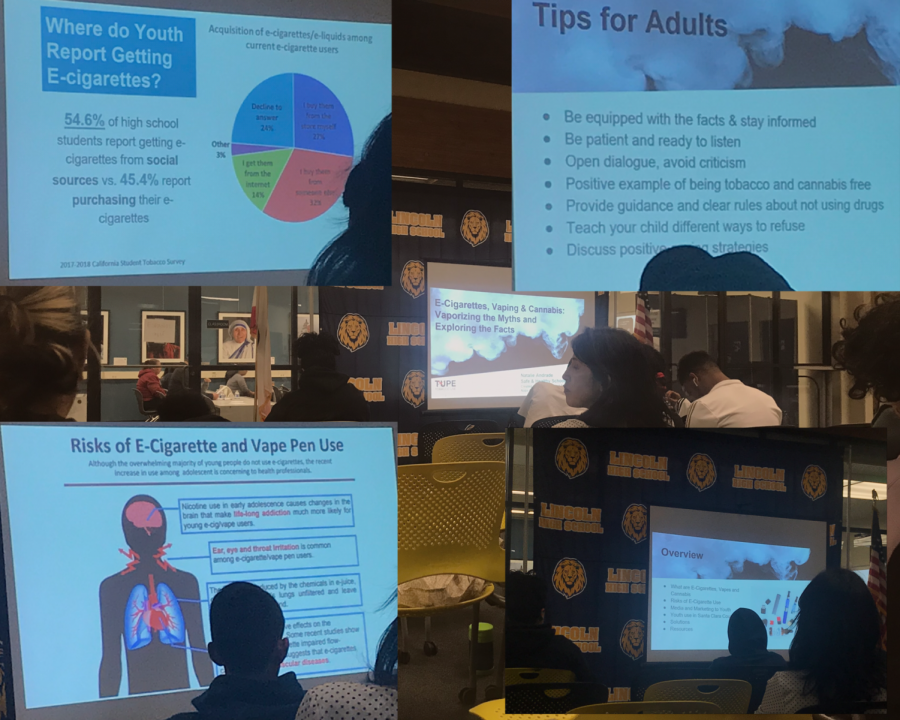 Some of the slides presented this Monday during the PTSA Talk:"The Danger of Vaping" in the Lincoln Center (Tabatha Menten/Lincoln Lion Tales)

The meeting organised Monday, November 18, was presented by PTSA Speaker Series and named “The Danger of Vaping.” The previous event organised by PTSA was “Angst” a movie about anxiety that met a lot of success.

The theme of the event was vaping, a phenomenon that has been talked about a lot because of the increase of vapers on our campus. But why is everyone so scared of vaping? And why do students like it? Monday’s talk was about all of that.

The talk was given in the media center at 7pm this Monday. After everyone was seated, Natalie Andrade, a Specialist in Safe and Healthy Schools, began her Powerpoint. The title was relevant: “E-cigarettes, Vaping & Cannabis:Vaporizing the Myths and Exploring the Facts.”

She began by explaining what are the differences between an E-Cigarettes, Vapes and Cannabis. She also showed a little video where we could see that all those products are pretty similar with school supplies. Most of the parents didn’t know what those new devices looked like.

She continued by speaking about the risks of E-Cigarette use. For example, nicotine causes changes in the brain that make a person at a young age addicted for life. Also, ear, eye and throat irritation is common for users. 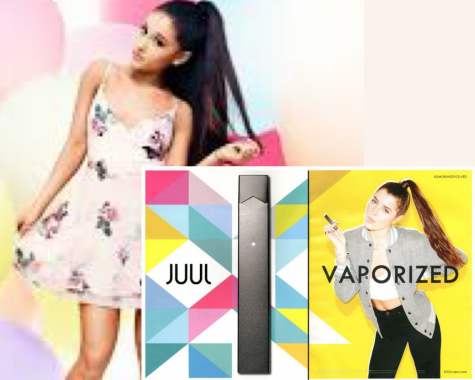 After that, she talked about the Media and Marketing to Youth. She explained how e-ciagrette ads are specifically made to make young people want to use the product. This ad for Juul is an example of this. In the ad, one sees a young woman, who looks very similar to Ariana Grande in her hairstyle, promoting the product. This, along with the color and design of the ad, is an example of this targeted advertising. She also showed where do youth report getting E-cigarettes.

The graph revealed that 27% buy them from the store even if the law prevent to sell E-cigarettes under the age of 21 years old. The majority (32%) reports buying them from someone else. At the end gave some tips to help parents who don’t know how to react to this new trend. 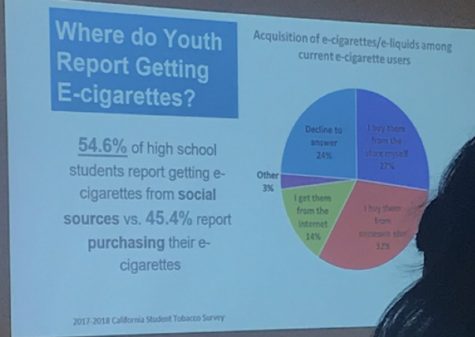 Graph:”Where do Youth Report Getting E-cigarettes?” presented during the PTSA talk about the Dangers of Vaping.(Tabatha Menten/Lincoln Lion Tales)

Here’s some of the tips:

Be equipped with the facts & stay informed;
Be patient and ready to listen;
Open dialogue, avoid criticism…

At the end of the talk, I asked some questions to Natalie Andrade who accepted to answer them.

She said, “vaping is a big issue because when these products came out, they intentionally target their products to young people, like teenagers by using ads with trendy young model and social media,” she said. “That’s why we can talk about a vaping epidemic.”

Andrade concluded by saying schools contacted her “to talk about those subjects…to educate the vaping issues to students and parents.” She also said about this new vaping epidemic “students like those news products because of the design, they look like Apple products and students like that.”