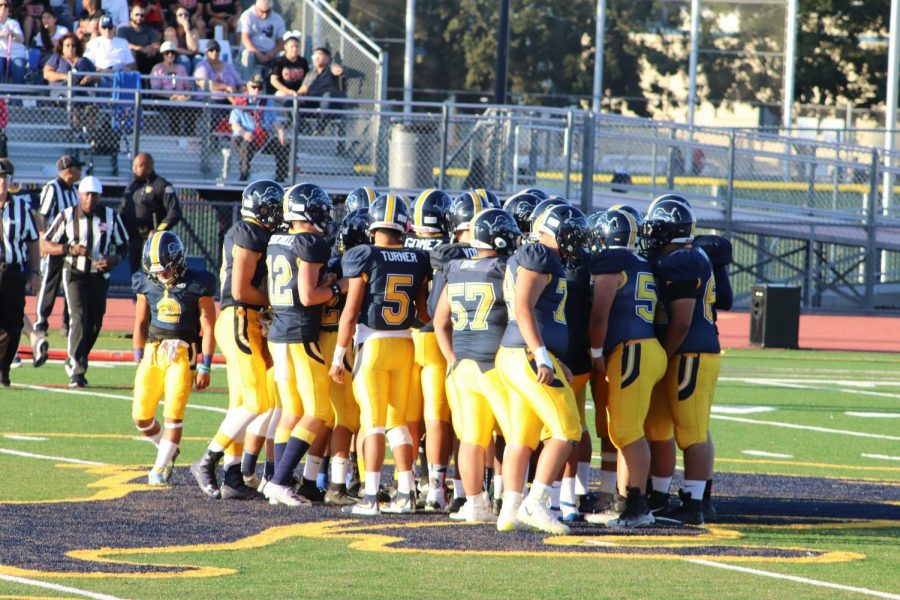 Minutes before the game started the team had a talk. They all met in the middle to get pumped up. The game took place at the Lincoln football field on Friday, August 30, 2019. (Jetzemani Diaz Villalobos--Lion Tales)

The Lions finished the season with a 5-4 overall record, while going 4-3 in league games. Sadly, they weren’t able to qualify for CCS playoffs like they did last season. Senior Adam Arenas led the league in rushing yards and touchdowns, with 1,470 yards and 20 total touchdowns. With those stats he’s sure to lead the Lions to their 22nd consecutive Big Bone win.

The final game of the season will be the 77th annual Big Bone Game against the San Jose High Bulldogs on Thanksgiving Day. The game will be played at Lincoln High School, beginning at 11a.m.

I spoke with some Lincoln students and asked them about their expectations for the game. Junior football player Uriel Ramirez said “I’m excited to play in what could possibly be the last Big Bone on Thanksgiving Day… It would’ve been a lot better if we could’ve made CCS…” Head football coach Kevin Collins was quoted earlier this year by Lion Tales journalist Mason Fenster saying, “If the audience stays short here, we will move the Big Bone to another date instead of on Thanksgiving Day.” Senior Marcus Gill said “I look forward to watching the football team bring back the bone for the 20 something consecutive year.” Come out, support, and show your Lincoln Lions spirit as Uriel Ramirez said, this might be the final Big Bone Game ever played on Thanksgiving Day.