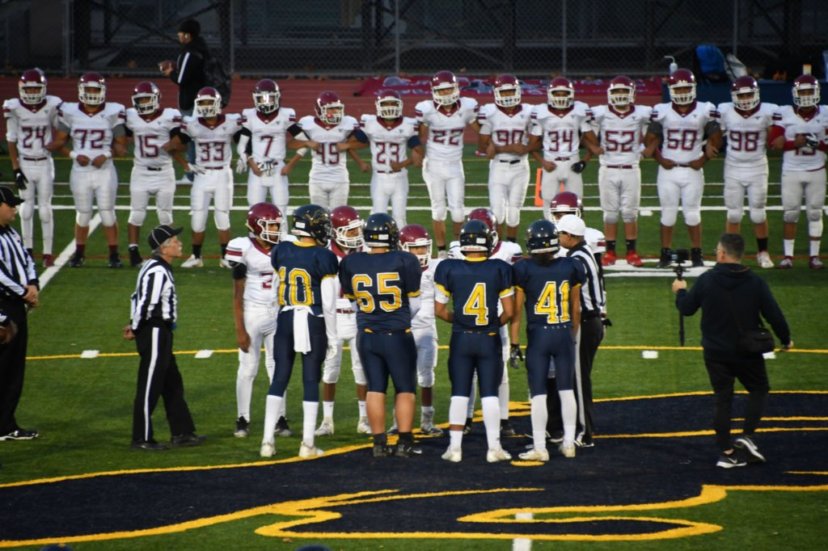 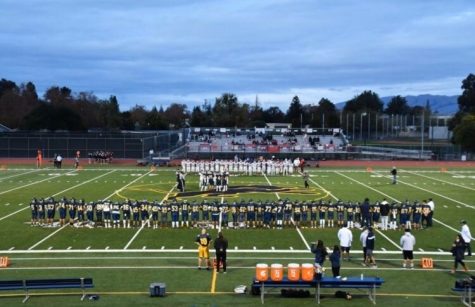 This year was the 77th annual Little Bone football game, held on Thursday, November 15th, 2019 on our own field! The Lincoln Lions played against their lasting rivals, the San Jose High Bulldogs. Before the game, the Lincoln Pep Band marched out the Lincoln JV team, to hype up the last game of this almost undefeated football season. After warmups, both teams stood on the opposite fields with their right hands over their hearts to pledge for the national anthem. #41 Jose Orendain , #4 Robert Vargas , #65 Thomas Macias, and #10 Thomas Crawford ; were the captains on this special night. They walked out meeting the San Jose High captains to do the coin toss. The bulldogs called heads and the coin landed on tails.

The first kickoff started off with #4 Robert Vargas attempting an onside kick. Unfortunately, San Jose high received the ball before Lincoln could get to it resulting in Lincoln to start off on defense. #65 Thomas Macias with a sack on the first play of this game. San Jose high couldn’t get the first down therefore causing a turnover to take place. Next, #4 Robert Vargas ran for 12 yards and obtained the first down. #22 Louie Catano, caught a touchdown passed by #33 Tayden Phillips. After, #80 Kennedy Schoennauer made the field goal. With the score 7-0. After, #4 Robert Vargas kicked off, San Jose’s player #21 fielded the ball and ran it for more than twenty yards. During the 2nd quarter, #4 Robert Vargas got a touchdown then #80 Kennedy Schoennauer kick got blocked by San Jose High. #33 Tayden Phillips passed the ball to #22 Louie Catano but unfortunately it was dropped and incomplete. By the end of the 1st half, the score was 13-0.

The halftime performance started off with San Jose Highs’ cheerleaders performing doing a great job. Following them was the Lincoln cheer team with an outstanding performance, up next was Lincoln’s LPC dance team, and lastly the convertibles. The Bulldogs and Lions Homecoming royalty were announced. The students on the homecoming court were Amari Glass-Dillard, Itzel Jimenez, Emma Perez, Epoki Fasoski, Anthony Alvarado, and Angelina Wolfe. Anthony Alvadrado and Itzel Jimenez won the homecoming royalty.

After halftime, San Jose High started off the 2nd half with an onside kick, recovered by #21 Nick Bernwanger. #4 Robert Vargas ran another touchdown but the play was flagged and sadly did not count. Lincoln failed to get the first down which led to a turnover on downs. San Jose High’s #10 ran a 23 yard run against the Lincolns defense, securing their first down. After, #26 Amari Glass came in for a 10 yard sack. SJH couldn’t get the first down so Lincoln obtained the ball from a turnover. #41 Jose Orendain scored 2 touchdowns back to back but there were both flagged and did not count, so the bulldogs got the ball again. The end of the 3rd quarter was an intense battle near San Jose High’s endzone. San Jose tried to pass the ball but couldn’t, so they punted. Later, #33 Tayden Philips, fielded the ball and took the ball into the endzone for another touchdown. #80 Kennedy Schoennauer kicked the ball for 1 point conversion. Now making the score 20-0 with the lions still in the lead.

During the 4th quarter, #21 Nick Bernwanger intercepted the ball and ran a pick six for 94 yard touchdown! #18 Carlos Trinidad kicked again and lead the team into a 27-0 score. After kickoff, #7 Mason Fenster intercepted the ball the last play of the game but did not make it into the endzone. The final score of the 2019 annual Little Bone was 27-0. The bone once again, stays home!