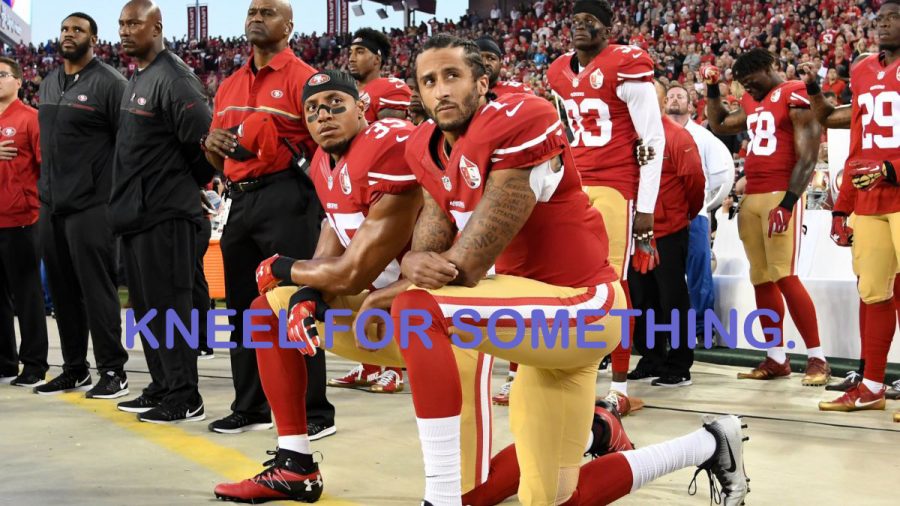 What is freedom of speech when we are oppressed by society? Ask Colin Kaepernick, he’d know. As a form of protest, Kaepernick kneeled during the national anthem before their game against the Green Bay Packers in 2016. After this, Bay Area’s 49ers owners made an executive decision to release him. 3 years later and he still has not been signed onto another NFL team. He knew this could have been a possibility in 2016 when he said “This is not something that I am going to run by anybody,” he said. “I am not looking for approval. I have to stand up for people that are oppressed…If they take football away, my endorsements from me, I know that I stood up for what is right.”

Kaepernick choose to peacefully protest the Black Lives Matter movement by taking a knee during the national anthem. He stated in an interview “I am not going to stand up to show pride in a flag for a country that oppresses black people and people of color. There are bodies in the street and people getting paid leave and getting away with murder.”

My question is, why did he experience so much backlash for peacefully protesting for something he believes in? I have to admit, my first reaction when I saw this on the news was outraged. I was disgusted by the fact that that I thought he disrespected our veterans and current soldiers, but my opinion quickly changed once I did some research.

Kaepernick justified himself by telling the press, “We chose to kneel because it’s a respectful gesture.” Him and many other football players joined the gesture and started spreading awareness through social media as well.

Kaepernick’s gesture changed the NFL official rules. At first, the association said “In respecting such American principles as freedom of religion and freedom of expression, we recognize the right of an individual to choose and participate, or not, in our celebration of the national anthem.”, meaning it is their decision what they choose to do during the national anthem. But after numerous NFL players joined his movement, the association changed their rules in 2017. They made a contract stating that all players must “stand and show respect for the flag and the Anthem.” Thus, leading the protesting players to stay in the locker room during the anthem.

As I thought about it some more, I realized that the reason why Kaepernick lost his whole career is because of the public’s backlash. Many people who saw him kneel didn’t realize the purpose behind it, me included. After some research, I have a newfound respect for Kaepernick and his beliefs. We can all support his Black Lives Matter movement by joining protests and spreading awareness. This is not a debatable issue, this is real and it is happening now.