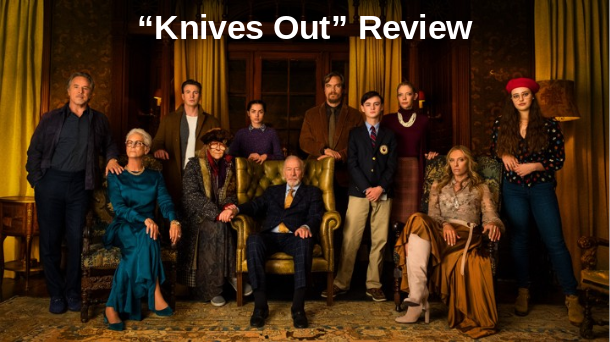 The cast of Knives Out. (Kevin Gonzalez-Lion Tales)

Warning: This story contains spoilers for the movie Knives Out.

Knives Out, directed and produced by Rian Johnson, takes place in a small town in Michigan. The movie travels back and forth between the Thrombey mansion and the rest of the town. It is a murder mystery film starring multiple cast members including: Daniel Craig as Detective Benoit Blanc, Chris Evans as Ransom Drysdale, Ana de Armas as Marta Cabrera, Jamie Lee Curtis as Linda Drysdale, Michael Shannon as Walt Thrombey, Don Johnson as Richard Drysdale, Toni Collette as Joni Thrombey, Lakeith Stanfield as Lieutenant Elliot, Katherine Langford as Meg Thrombey, Jaeden Martell as Jacob Thrombey, and Christopher Plummer as Harlaan Thrombey.

The movie begins with housekeeper Fran (Edi Patterson) walking into Harlaan Thrombey’s (Christopher Plummer) and finding him dead on the couch with his throat slit from an apparent suicide. The story then begins from there with the caretaker Marta Cabrera (Ana de Armas) being named as the only heir to the Thrombey throne, which angered the rest of the Thrombey family since they were left nothing.

Later on in the movie, Marta gets an email from an anonymous source telling her to go to an abandoned laundromat to find answers on who has the toxicology report which could prove Marta as Harlaan’s murderer. After a high speed chase with the police, Marta and Ransom are arrested. Marta, knowing that she has to be at the laundromat at a certain time, tells Detective Blanc to go to the address so she can grab something which he then agrees. Marta then sneakily goes around the back and goes into the laundromat through the back door. When she gets there though, she finds housekeeper Fran on the floor, dying due to being injected by a high dose of morphine. Marta is then faced with the choice of fleeing the scene and have the police come after her, or call 911 and save Fran’s life while also turning herself in.

At the ending of Knives Out, it seems as if Marta is really the killer until Detective Blanc steps in with the real story. HE begins telling Marta and police Detective Hardrock (Joseph Gordon-Levitt) about what truly happened. He then sums up what’s happened so far in the movie and comes to the conclusion that Harlaan Thrombey’s real killer was his grandson, Ransom. He then brings Ransom in and starts explaining what Ransom did, while also explaining why. After Ransom knows that he’s been found out, he attempts to kill Marta with a knife and tries to stab her, before realizing that knife is actually fake. In the end, Ransom is sent to jail, and Marta stands over the Thrombey family in her new mansion, which tells the family that it is time for them to go.

When asked about what they thought of Knives Out, Senior Evan Cajigas went on to say, “It was a really good movie, It’s definitely going in my top 10.” Another Senior, Daisy Vega also went on to add, “The movie is super good, and the ending was so awesome.” Another Senior, Selma Korkic also added, “Knives Out was one of the best movies I’ve ever seen, I would recommend it.” When also asked what they thought the best part was, Senior Luis Collazo went on to state, “Knives Out is a pretty good movie, and I highly enjoyed watching it with my cousin.”

The movie, while 130 minutes (2 hours and 10 minutes) is an overall good film that shows how a good mystery can happen at anytime. The movie had the whole audience believing that Marta Cabrera was the one who killed Harlaan, until the end when the audience discovers that it was in fact a suicide all along thanks to Detective Blanc’s amazing detective skills. If you haven’t already seen this movie yet, I’d recommend this one 100% because of it’s humor and it’s mystery theme.        ★★★★★