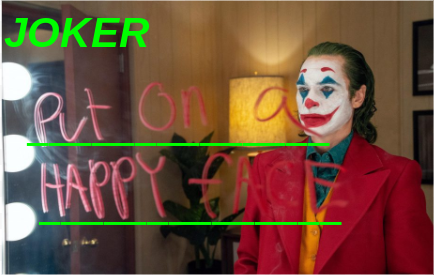 Joker, directed by Todd Phillips, takes place in the fictional city of Gotham. The movie follows the life of Arthur Fleck (Joker), played by Joaquin Phoenix, and the events in his life that lead him to madness; eventually getting the name Joker.

DISCLAIMER: The following paragraphs may contain spoilers. Also, the movie is very graphic and isn’t recommended for people who are weak of the stomach or those who get easily offended. *Skip to the last paragraph if you only want to read the review.*

Arthur Fleck is a mentally deranged individual in Gotham City. He works for Ha-Ha’s as a clown for hire. His first rough encounter with society comes when some teenagers steal the sign Arthur is spinning and end up beating him up with it. He then continues his slow and gradual fall into complete madness. On his way home, he has an encounter with his neighbor Sophie Dumond, played by Zazie Beetz in the elevator. This then leads to Sophie attending one of Arthur’s comedy shows, Sophie and Arthur going on a date, and both of them engaging in sexual actions. However, when Arthur enters Sophie’s apartment, she is scared and worried about her child’s safety. Followed by the realization that all of the previous events were only Arthur’s imagination. (Opening the door for the audience to wonder if the remaining events in the movie are real or imaginary.) Later on, Arthur is seen on a subway car with a woman and three other men. He draws their attention when he starts frantically laughing and they eventually jump him. To the audience’s surprise, Arthur pulls out a gun, given to him by his co-worker Randall earlier in the film, and shoots all three men. While 2 of them died on the spot, the third manages to get out of the car at the next stop, but Arthur catches up to him and finishes the job. Days later, the news about the three dead men spread around the city, sparking riots in support of the murders. Arthur’s mom Penny Fleck, played by Frances Conroy, reveals that Thomas Wayne, played by Brett Cullen, might be Arthur’s father. He then embarks on a search for the truth. He visits Wayne Manor to confront Thomas Wayne; but instead comes across Bruce Wayne, when he was a child and begins talking with him. Eventually, Arthur does confront Thomas Wayne at a theater, which didn’t go well, and gets punched in the face. That punch was the final straw of Arthur’s complete spiral into madness. He goes on the Murray Franklin Show with Murray Franklin, played by Robert De Niro, where he is first introduced to the public as “Joker”. During the show tensions rise and Joker pulls out his gun and shoots Murray Franklin in the head. Leading to the riots getting worse and causing the murder of Martha and Thomas Wayne in front of their son Bruce Wayne. Joker is put into police custody but is soon freed by followers of his movement when they crash a garbage truck into the police cruiser. Joker then gets on the roof of the police cruiser and smears blood from his nose around his mouth.

One of the main messages the movie was sending was; a small act or event on someone’s life can drastically alter the way they live their life and that you don’t know what’s happening in someone’s life, so treat them fairly and with respect. “Joker” also shows how people offer their support to someone when it’s too late. The movie did a great job with character development and depicting Arthur Fleck’s ability to blend in and be accepted by society. Joaquin Phoenix did a great job portraying Fleck and the battle he has with himself, as well as society. Some smaller points of the movie that stood out to me were how, what seems like a small meaningless gesture, could affect an individual’s life. In Arthur Fleck’s case, some small gestures drove him further into madness. Director Todd Phillips did an amazing job with the cinematography, making the audience feel as if they were part of the development of Joker’s persona. “Joker” is definitely a 5-star movie and should be watched by everybody, regardless if you like comics or don’t care for them at all.