Final Game as the Oakland Raiders 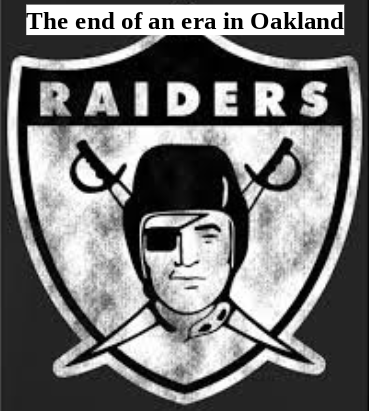 Sunday December 15th, 2019 was, and will be, the last Raiders game played in Oakland. The Raiders lost to the Jacksonville Jaguars by a score of 20 – 16.

The Raiders held a 16 – 6 lead going into the 4th quarter. However, the Jaguars proceeded to score 14 unanswered points and winning the game. According to Bleacher Report, most of the fans in attendance booed quarterback Derek Carr off the field following the loss. Fans were also throwing food and garbage onto the field in disappointment and anger. Some fans even rushed onto the field. As shown by their actions, the Raiders fan base was upset that they blew their final game at the Oakland Coliseum.

Senior Michael DeRueda felt heartbroken because, “We couldn’t win our last game in Oakland… to see that’s how you’re leaving Oakland on a [bad] note.” Despite the heartbreak, he showed how much he truly loves the Raiders. “But all in all… they move to Vegas, I’m still going to be a die hard Raiders fan no matter what. It’s going to be hard to go to games because of transportation. But no matter what, Raiders till I die.”