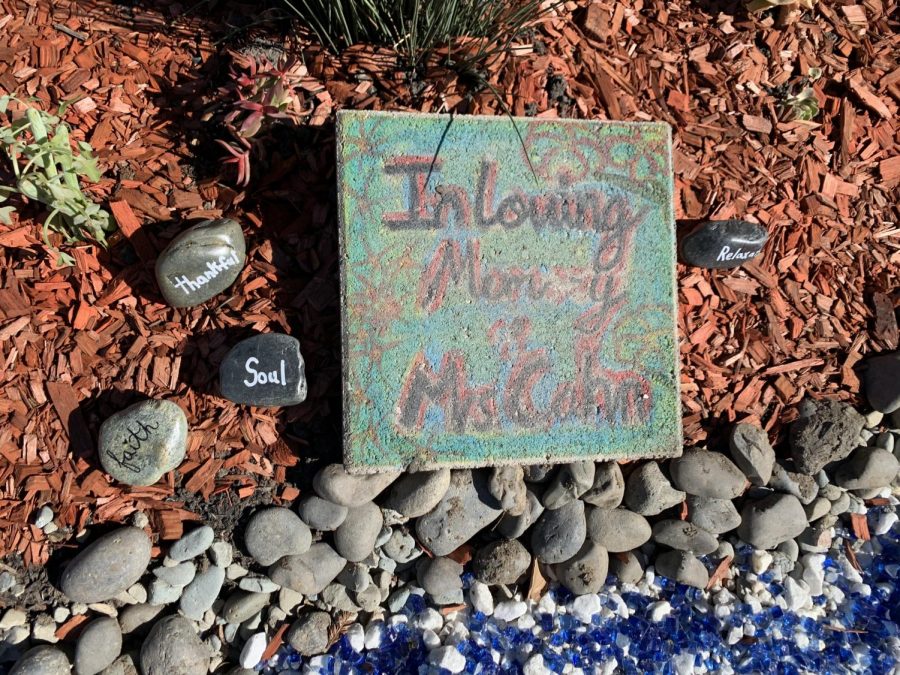 Stones with hopeful words on them in "Garden of Hope" (Ariana Noble/Lion Tales).

After the passing of Lincoln’s former teacher Mrs. Cahn, her garden outside of the Lincoln center was left to perish for months. Over the weeks flowers were dying and dirt was getting kicked around, until eventually, there was just old dirt left. The whole Lincoln community witnessed this happening, but one Lincoln teacher went above and beyond to revive this small, but meaningful garden.

Anne-Marie Katemopoulos, Lincoln’s choir teacher, also known as Ms. K by her students, decided to redo the garden with her students after Eileen Zamora and Michelle Bennet suggested it. After the recent passing of her sister who was an avid gardener, Ms. K decided to pass on her legacy at Lincoln.

Lion Tales interviewed Liz Neely, the owner of the other garden on Lincoln campus, to get some more information. She told us Ms. K had emailed some teachers about participating and “it just started off”. Due to Ms.K’s sister passing, she had “tons of succulents” and Ms. Neely had “taken some of my succulents that had matured out in my garden” to donate to the Garden of Hope. Anything that they did need to purchase, Ms. Neely bought out of her budget for her other school garden.

Lion Tales recently found out that Lincoln is going to be installing new tables and chairs in front of the media center due to the $40,000 donated by the Lincoln Foundation and asked if it would affect the Garden of Hope. Ms. Neely said “they’re going to build around it and we hope that kids once they start migrating that way more, will have respect for the space.”

Ms.K and Ms. Neely invited anyone to help plant the garden. “The more kids who took part in it, the more likely they are going to be to not just stand by and have someone vandalize their work…that’s why we brought so many kids out there over the course of the 3 or 4 advisories.”

She hopes that the increased “influx of students will bring about more people enjoying it.”

Ms. Neely’s garden outside has been facing some renovations as well, such as a new pond, new plants, and more open space.

We asked her what it meant personally to revive Mrs. Cahn garden and she said “I am a big proponent of kind of feeling whatever feelings you have and I think this allows us to have a space where we can acknowledge that we’re one man down.”

Lion Tales also interviewed Katarina Ceprnic, one of Mrs. Kahn’s former students and a current student of Ms.K. She described that each music class wrote inspirational words on rocks such as “courage, strength and growth.” She also said that all of the music classes came together and planned out how they were going to revive the garden.