Monday February 10, I have had the chance to go to a Shark Game. Hockey on ice is not really popular in Belgium, and so it was my first time watching one. 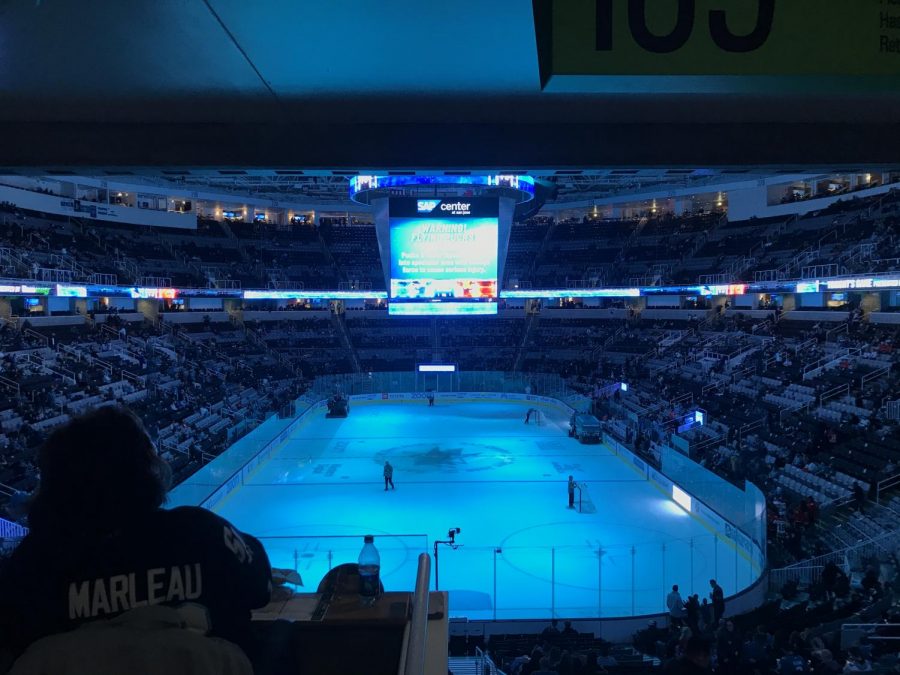 The Sharks were playing at the SAP center against the Canadian team the Calgary Flames. It was my first time going to the SAP center and I was really impressed by the architecture of the building. Indeed, from the outside, the building looks kind of small. From the inside, you feel like you are in a little town with different levels.  Also, the fact that the ice skating is in the center of the building and circled by foods places, is really ingenious. The game began at 7.30pm and the Sharks made a memorable entry, coming out of a Shark mouth. After that they sang both the Canadian and American anthem, and the game began. I am not a professional in hockey and it was my first time going to one, so I was really surprised by the violence between both teams. I remembered players checking each others against the walls. Also two players removed their helmets and almost fought a few times during the game and none of them got expelled, which is really weird for me.

Another surprise was that fans can’t move during the game. Indeed, no one can enter or leave their seats while the players are playing. When a group of people did that and made me miss one of the goals, I understood why this rule was important.

During the break between the game, some games with the public were organized, as well as a kiss cam. It felt like I was watching a video on my social media, but it was the reality. I had never seen that before at any game of any sport in Belgium.

Finally, I was surprised that the referee wasn’t going back on his decision. In soccer, if the referee is not sure, or the players are not, they can ask to see a video to make a new decision after. Here, a lot of penalties in favor of Calgary were not always justified. In first period, Brenden Dillon received a penalty for Slashing. In second period, Stefan Noesen received two for Roughing and Evander Kane for Elbowing. Third period, Dillon, Meier and Kane received penalty for Tripping and Stefan Noesen for Game Misconduct.

The final result was 6-2 for the Canadian. In first period, Calgary scored three goals, (Milan Lucic, Tobias Rieder and Zac Rinaldo) when the Sharks only scored one (Erik Karlsson). Second period, Brent Burns from the Shark and Mark Jankowski for the Flames scored. Third period, Mattew Tkachuk and Mikael Backlund finished the game by scoring two other goals for the Flames. The three stars of the game were, obviously from the Flames. It was Zac Rinaldo, Noah Hanifin and Milan Lucic.

I unfortunately didn’t bring any good luck from Belgium.