Protests erupt in San Francisco, Oakland, Los Angeles, and other cities nationwide in response to the death of George Floyd while in custody of Minneapolis Police. 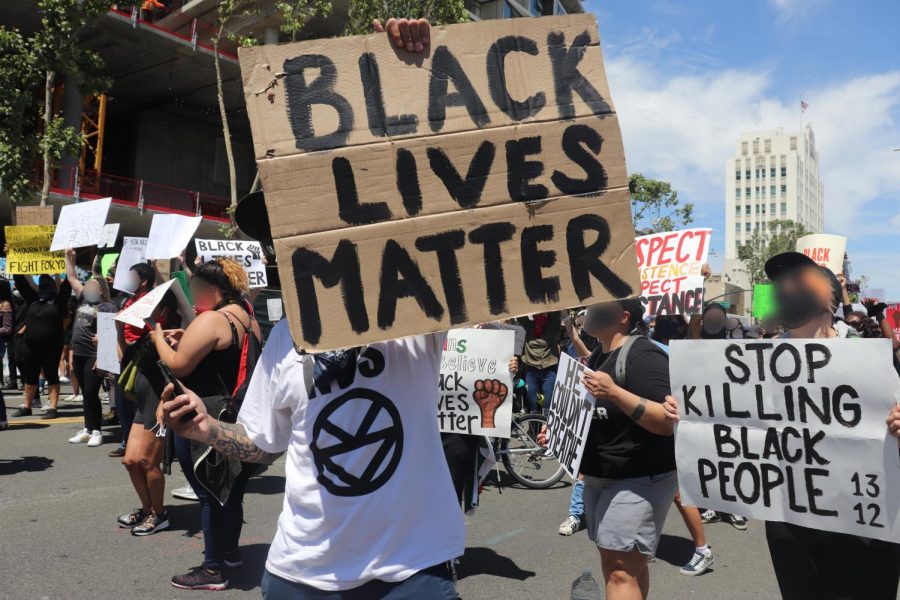 San Jose protestors holding up signs and marching for the death of George Floyd. Downtown San Jose at City Hall on May 29, 2020 (Andrea Saldana/Lion Tales)

On May 29th, the people of San Jose protested for the death of George Floyd and many others on the behalf of police brutality. Adults, teens, and even children came with their signs to speak out for the injustices the black community has faced for centuries.

The recent death of George Floyd, a 40 year-old African-American male who was put to death by an officer named Derek Chauvin in Minneapolis. The tragic video of the police officer placing his knee on Floyd’s neck, killing him, has caused an uproar in the black community.

The San Jose protest was allegedly planned overnight, many people were sending posts with information of the event through social media. It caught a lot of attention and by the time the protest began there was already a huge crowd at the front of City Hall.

The protestors had signs that said, “I can’t breathe”, “Black Lives Matter”, “Justice For Floyd”, and many more. Similar to their posters, the protestors began chanting to bring awareness to their protest for all of San Jose to hear.

Ten minutes after the protest began, the protestors took to the streets and marched all through downtown chanting “Say his name! George Floyd” and other chants as well.

People working inside the local businesses and others driving gave their support by cheering on the protestors and honking their horns. The protest was peaceful and everyone was using their voice for the greater good.

After marching through Downtown San Jose, the protestors decided to march through North of City Hall, which led them making their way to Highway 101.

San Jose protestors blocked both ways of the highway, standing in front of traffic to get their message across. Not too long after, some protestors began to vandalize cars and break windows.

According to a tweet made by Brittany Alessa, who was at the protest on the freeway, not everyone was welcoming of the protestors.

“Not ALL the cars that were smashed were innocent people let me tell y’all that, the ones I witnessed up close in person were saying racial slurs and were part of the blue lives matter movement,” Alessa tweeted.

The protestors began to make their way back to city hall since many were unsure about their safety of protesting on a freeway. When the protestors arrived at City Hall, more people came to protest alongside them.

By 5 pm, the protest turned violent.

Protestors were getting close to police and police reacted by pushing and shoving protestors back. After protestors began throwing objects at the police, rubber bullets were shot.

Protesters were getting hit by SUVs and cars, and one girl in particular after she was hit the police began to spray tear gas to those trying to help her.

A UPS truck was also targeted and people began to steal and throw packages on the street.

The San Jose Police Department sent out an alert to people who live in the downtown area to stay home due to riot activity.

At the end of the day, the protestors had one message and it was to bring justice to the deaths of black people that were caused by police. Many criticized the protest online while others believed it was the proper way to handle the situation.

“I think it is important just to show people that we are all against this and that none of us are okay with it,” said Isabella Story a senior at Lincoln High School. “The whole nation needs to be doing protests to show that we are not okay with this no matter what.”