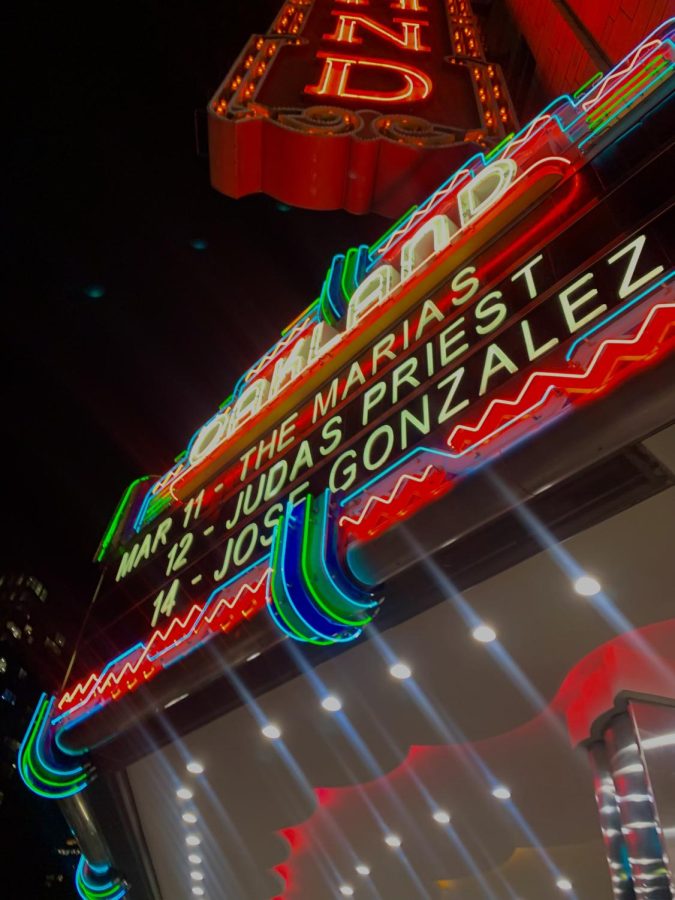 The Marquee outside of the Fox Theatre

The glowing sign of the Oakland Fox Theatre was in sight as we arrived at the venue. We approached and could see the long skirts, leather jackets, and Doc Martens being worn by almost every single person there waiting to see The María’s, including Anja VanderZee and me. Waiting in line gave us an opportunity to admire the outside of the venue, where the lights from the sign were giving the scene a moment of unrealness. The air was cool and wind was blowing through everyone’s hair, it felt like those moments where you’re at the top of a roller coaster at night and nothing feels real.

That feeling continued throughout the rest of the night as The María’s, a band that originated in Los Angeles by lead singer María Zurdoya and drummer Josh Conway, played amazing song after amazing song. The first part of the U.S tour started in Las Vegas, Nevada, and ends in Los Angeles, California. The second to last show was held in the Fox Theatre on March 11, which I had attended. The former movie house that was opened in 1928 to the public was renovated and is now a place where many artists perform. The inside was breathtaking. It felt like we were transported back in time and were surrounded by ancient beauty.

The doors opened at 7:00 p.m. and we went straight to the merchandise line. Once we purchased our overpriced shirts, we went to choose a spot to stand for the show. The openers of the show were amazing. OGI and Evann McIntosh opened the show at 8:00 and finished around 9:00. Both of their sets were very different from one another, but they still fit that vibe that was going to be set for The María’s.

The band didn’t come out until we started to chant out “María” at around 9:32 when the girl next to us was encouraging everyone else to chant alongside her. The lights went out and the stage was a bright red with a lot of smoke that filled up the entire vintage venue. María didn’t come out until the entire band was up on stage. They started the setlist with “Calling U Back”.  A couple of the songs had trumpets, and we got to witness the beauty of a trumpet being played in front of us, thankfully on our side. After “Over The Moon”, we got a cover of a Britney Spears song, “…Baby One More Time”. I personally love Britney and was very excited when I got to experience hearing it live.

At the end of, “All I Really Want Is You”, the light turned off and the band left the stage. Everyone around us was very confused as to why they had left. The chanting of, “The María’s!” happened once more since it felt like they still had a few songs left to play. The lights started to flash very rapidly and nothing could be seen due to it. One of the guys next to us was getting on top of someone’s shoulders and eventually fell once María came out. “Hush” was the next song that they were performing and the environment felt different. It was more exciting to see them once they had come out.

The night ended with their hit song, “Carino”.  The whole audience raved when it came on since it’s an all-time fan favorite. Thanks to the light selection and the cheers of the fans, the whole venue lit up. For the next two minutes of the song, everyone was swaying back and forth together in order to fulfill the last moments that any of us were going to be in a room together enjoying the same music we all like. We were all left with the biggest smiles and cheers coming from us. The band eventually had to say their goodbyes and gave their bows. The stage lights went white and were left with an empty stage.

It was a breath of fresh air when I noticed when looking around me was the amount of Hispanic representation there was in the audience. So many people who have a cultural background the same as me, who had the time of their lives watching a band whose frontman is a Latina woman. This band has been described as ‘the perfect indie band for LA kids’. I’ve only gone to one concert before this one and both were great experiences. The people around us also made this a fantastic experience.