ISIL Continues With Its Terror 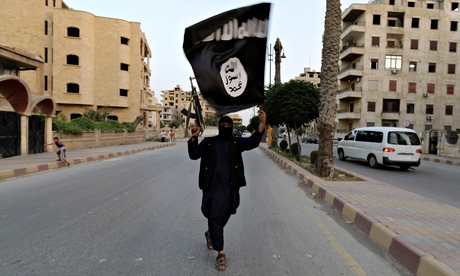 This photograph from Stringer/Reuters shows an Islamic State fighter with his weapon in one hand, and an ISIL flag in the other.

You can not go through the recent news without paying attention to the new kind of terror that is taking place in Iraq and other places in the Middle East. Beheadings of international hostages and violence is seen in the TV and the Internet every day. But the question everybody is asking themselves is; when will it stop and what will happen next?

It is very uncertain how things are progressing in Iraq right now. Although the terrorists are threatening the big world governments that they will kill more hostages if the international troops don’t stop attacking, politicians worldwide decided recently that it would be the best solution to take bigger actions in order to finally stop the problems affecting the Middle East.

ISIL (Islamic State of Iraq and the Levant) released three videos which each show the beheading of one person, with the announcement that if the attacks against ISIL will not stop, the next person will die. This is a result of the terrorists showing how deadly serious they are.

So far, the two American reporters James Foley and Steven Sotloff, and the British aid worker David Haines were victims. They were executed like criminals, and their deaths used as a public event.

President Obama was very upset about the recent events. On Sept. 10, Obama confirmed that there will be airstrikes against ISIL targets. “This strategy of taking out terrorists who threaten us while supporting partners on the front lines is one that we have successfully pursued in Yemen and Somalia for years,” (Barack Obama Relies on Airstrikes to Rout ISIL) were his words about what the next actions will look like.

Even though it has been said that the people in America are safe, there is still fear that the actions taken are not good enough. Many people still have the disturbing pictures of 9/11 in their heads.

The ISIL recently told the public that there would be members everywhere, in every country, and that these people would be willing to die in order to fulfill their goals. And they did not lie.

There are many people who have traveled to Iraq to become fighters for the ISIL army, even though it is unlikely that a return trip home will be possible.

ISIL is using these mercenaries as cheap troops, sending them to the front lines, where their death is nearly unavoidable. A lot of these mercenaries that joined the war in Iraq are expatriates from Germany. Statistics show that nearly 300 German ISIL fighter have already died in Iraq.

However, some famous peaceful Muslim organizations around the world say that the people that are causing terror in the ISIL are not true members of the Islamic belief system. “The IS is a crime that can’t be tolerated!” said Iyad bin Amin Madani, the general secretary of the Organization for Islamic Cooperation.